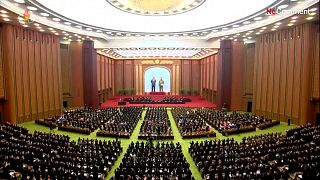 North Korean leader Kim Jong Un expressed his willingness to restore stalled communication lines with South Korea in coming days while shrugging off US offers for dialogue as "cunning ways" to conceal its hostility against the North, state media reported Thursday.

Kim's statement is an apparent effort to drive a wedge between Seoul and Washington as he wants South Korea to help him win relief from crippling US-led economic sanctions and other concessions.

Pyongyang this month has offered conditional talks with Seoul alongside its first missile firings in six months and stepped-up criticism of the United States.

The UN Security Council scheduled an emergency closed meeting on Thursday at the request of the United States, United Kingdom and France on North Korea's recent tests.

During a speech at his country's rubber-stamp parliament on Wednesday, Kim said the restoration in early October of cross-border hotlines — which have been largely dormant for more than a year — would realize the Korean people's wishes for a peace between the two Koreas, according to the official Korean Central News Agency.

Kim still accused South Korea of being "bent on begging external support and cooperation while clamoring for international cooperation in servitude to the US," rather than committing to resolving the matters independently between the Koreas.

Some experts say North Korea is pressuring South Korea to tone down its criticism of its ballistic missile tests, which are banned by UN Security Council resolutions, as part of its quest to receive an international recognition as a nuclear power.

North Korea has long called US-led economic sanctions on it and regular military drills between Washington and Seoul as proof of US hostility on his country.

Kim Jong Un has said he would bolster his nuclear arsenal and not resume nuclear diplomacy with Washington unless such US hostility is withdrawn.

After nearly 10 years in power, Kim Jong Un has said North Korea is facing its worst-ever crisis due to the coronavirus pandemic, the US-led sanctions and natural disasters.

In his parliament speech, he claimed progress in economic recovery projects but urged stronger efforts to fulfill objectives set earlier this year.