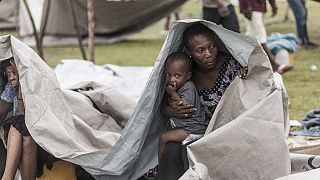 Tropical Storm has swept through the earthquake-struck island of Haiti

After nightfall, heavy rain and strong winds whipped at the country's southwestern area, hit hardest by Saturday's quake, and officials warned that rainfall could reach 15 inches (38 centimeters) in some areas before the storm moved on.

Makeshift camps of those who lost their homes in the quake were also affected, many with nowhere to go and nowhere to spend the night.

Port-au-Prince, the capital, was already getting heavier rain.

Meanwhile, Haitian authorities raised the death toll from the earthquake to 1,419 and the number of injured to 6,000.