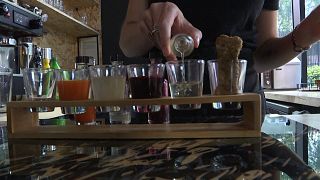 A London bar serving cocktails for humans and their dogs

The "After Bark" bar and cafe looks like any trendy watering hole in east London, with its neon sign and tables made of repurposed barrels and cable reels. But the menu is divided into "hounds" and "humans", with cocktails for regulars and "puptails" for their four-legged friends.

The doggie drinks, specially made and placed on the floor, are made of natural, healthy ingredients but go by racy names such as "Sex on the bitch".

"The 'puptails' that we have here on the menu, they are made out of raw beets, raw carrots, teas made with dandelions and burdock," says founder and owner Jamie Swan.

"Things that basically we would put in refreshing teas that are good for us, ginseng for instance, but that are also really good for them."

Meanwhile dog owners sitting at tables can order alcoholic cocktails such as a "Barkarita" or a "Bloodhound Mary".

"We've been to other dog-friendly places but none that we've let our dog run this freely everywhere, so it's new for us," says Moses.

On the floor, dogs sample a £10 ($14) taster menu of four puptails, served in glasses on a wooden stand.

Swan describes the venue as a "dogs and humans community centre", offering both a chance to socialise in a relaxed way.