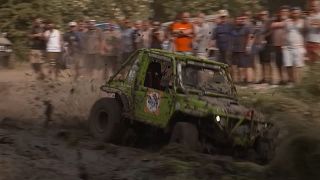 Almost 2,000 off-road vehicles competed, making it one of the biggest editions in the history of the event.

The organizers say 15,000 visitors have come here over the three-day event to watch cars battle it out in the mud and dust.

The event provides the opportunity for off-road enthusiasts to drive in a relatively controlled environment and compete in different races and challenges.

It originates from the 1980s when German off-road lovers, who were banned from driving in German forests, started to gather in the Hungarian countryside.

They came through the Iron Curtain to use their 4X4s and the festival remained in German hands until 1996.

The Babod Off-Road Festival, named after the tiny nearby village of Somogybabod, mostly attracts male visitors, often dads coming along with their sons. Some women are also present.

Participants are either owners of expensive, professional off-road vehicles or builders, who created or modified their 4X4 cars.

For the latter category, the festival is a way to show the result of their year-long work and to share their experiences.