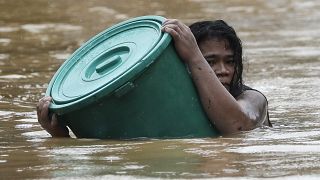 Major floods in Manila after Typhoon Vamco hits the Philippines

There was major flooding in the Philippines capital Manila after the third typhoon in as many weeks hit the south-east Asian country.

Typhoon Vamco brought winds of up to 155 kilometres per hour.

Authorities warned of life-threatening landslides and storm surges along the coast.

The heavy rains effectively shut down Manila, home to 12 million people, and the surrounding areas.

At least one person died and three others were missing in Camarines Norte province, the country's Civil Defense Office said on Wednesday evening.