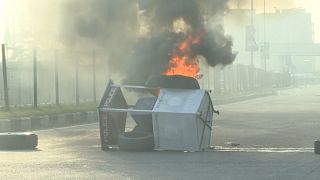 Shots were fired in Lagos Wednesday as protesters continued to demonstrate against alleged police brutality in Nigeria.

Demonstrators gathered at Lekki Toll Gate, where Amnesty International said late on Tuesday there was “credible but disturbing evidence” that security forces had fatally shot protesters who were demonstrating against police brutality despite a new curfew being imposed.

For several years human rights groups have blamed SARS for widespread abuses, including torture and killings.

The demonstrators have not been satisfied with the disbandment of the SARS and are demanding an end to abuses and respect for human rights in all parts of the police force.