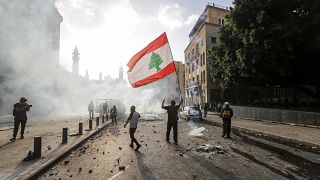 Thousands of demonstrators descended on the city centre to vent their fury at politicians they blame for the explosion, which levelled Beirut's port and killed more than 150 people.

Demonstrators marched through streets ravaged by the blast, gathering in the central Martyrs' Square, where a truck was on fire, as their grief gave way to anger.

Security forces fired tear gas to disperse stone-throwing demonstrators who tried to push their way toward parliament, a group led by retired Lebanese army officers stormed the foreign ministry and declared it the "headquarters of the revolution".

"We are taking over the foreign ministry as a seat of the revolution," Sami Rammah, a retired officer, announced by loudspeaker from the ministry's front steps.