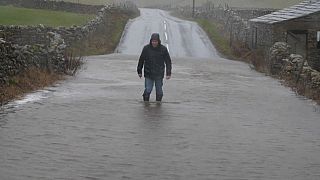 "Storm Ciara is expected to bring delays and cancellations to air, ferry and train services; damage to buildings and a good chance of power cuts," Britain's Met Office said.

Britain's Network Rail advised travellers to avoid taking the train on Sunday unless "absolutely necessary," warning that transport could be disrupted into Monday morning.

Several rail firms also decided to reduce the frequency and speed of trains.

In London, organisers cancelled a 10-kilometre race in which 25,000 runners were due to take part, while major parks were set to close.

It warned of "a significant risk of coastal flooding especially along western and northwestern coasts".

In the western Irish city of Galway, the finale for launching the European capital of culture 2020 was cancelled on Saturday evening.

"In the interests of the safety of the public the weather warnings currently in place mean that it has been deemed unsafe to go ahead," Galway 2020 said in a statement.