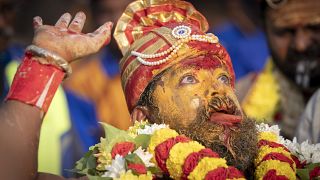 The annual Hindu Thaipusam festival sees believers carry offerings to places of worship to the deity Murugan and marks the day when his mother — the goddess Parvathi — gave him a powerful lance to fight demons.

It is observed mainly in countries with significant populations of ethnic Tamils -- descended from people who originally came from southern India — including Malaysia and neighbouring Singapore.

Massive crowds thronged the Batu Caves complex outside Kuala Lumpur as incense and drums filled the air. Many had trekked for hours to reach the popular pilgrimage site before the final arduous climb up 272 steps to reach the temples set in caves.

A huge variety of offerings, known as "kavadi", are on show — from simple pots of milk balanced on pilgrims' heads, to poles slung across shoulders, and large portable altars decorated with feathers and flowers.

Batu Caves Temple Committee estimates that some 1.5 million people, including many tourists, were expected to turn up from Friday night to watch devotees pierce their skins with hooks and skewers, with hardly anyone wearing face masks, seeming undeterred by concerns over the recent virus outbreak that continues to spread from China across the globe.

Visitors have been urged to observe personal hygiene and wear masks to minimize the spread of the virus.

There have been 15 confirmed cases of the Wuhan virus infection in Malaysia.