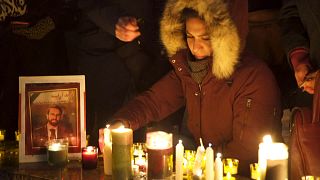 Prime Minister Justin Trudeau said multiple intelligence sources indicate that Iran shot down the Ukrainian airliner built by Boeing, although he conceded it may have been unintentional. The dead included 63 Canadians and many others headed for Canada.

At the vigil, people in Toronto — which has a large Iranian community — expressed anger and sadness over the tragedy.

Iran retaliated for the killing of general Qassem Soleimani by firing a barrage of ballistic missiles at Iraqi military bases housing US troops. The passenger airliner went down just hours later.

Some in the crowd at the Toronto vigil shouted "We want justice!"

Vigils were also held in Ottawa and Montreal.

In the capital, Trudeau laid a wreath during a ceremony held outside Parliament.