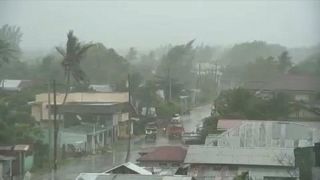 Thousands of people in the central Philippines are experiencing a wet and gloomy Christmas because of Typhoon Phanfone, which made its first landfall on Christmas Eve.

Phanfone has since made several landfalls in the Visayas group of islands, bringing heavy rains, strong winds, and flash floods to provinces in the region.

Thousands have evacuated their homes and thousands more are stranded in ports around the country, officials said.

Phanfone has maximum sustained winds of up to 140 kph (86.992 mph) near the centre and gustiness of up to 195 kph (121.167 mph), according to the Philippine Atmospheric, Geophysical and Astronomical Services Administration.

The Philippines, an archipelago nation of more than 7,000 islands, is annually buffeted by tropical storms and typhoons, which are called hurricanes and cyclones elsewhere.