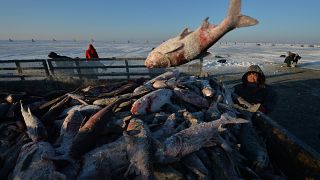 Chagan Lake fishermen are China's last remaining fishing tribe. They drill holes in the ice, throw in their fishing nets and use horses to pull the winches as they trawl for a catch.

In doing so, they are preserving a Mongolian tradition of paying homage to the lake and awakening the fishing net, which dates back more than 1,000 years. The catch per net may reach 50,000 kilograms.

The fishing season will last until the lunar Chinese New Year's Day on January 25.

Chagan Lake is one of the 10 largest freshwater lakes in China. It covers an area of almost 500 square kilometres, breeding more than 60 species of fish.

It is the only place that safeguards the ancient Mongolian fishing rite, which has been inscribed in the list of national intangible cultural heritage in China.