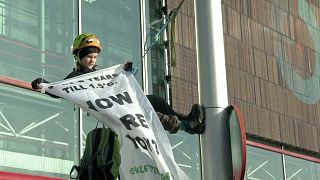 An 8-year-old climate activist climbed up a street light in front of COP25 summit on Monday (December 9) to demand action against climate change.

The young activist, Zozo, showed a white flag reading "How dare you?", a line from one of fellow youth activist Greta Thunberg's speeches.

Known on social media as "Kletterkinder," the movement has seen young activists climb in other cities such as Berlin or Aachen, to call for urgent action on climate change.

"We have no time left, we have eight years to get it below 1.5 degrees (temperature levels), and as long as out politicians are busying themselves with trivialities, more people will die, and more people will lose their homelands," Zozo said.

Police left Zozo hanging for around half an hour before climbing up to meet her and cutting the ropes she was hanging from to bring her down.

She carried out a similar protest at a march against climate change in Madrid last Friday that was attended by thousands.

The protest coincides with Madrid hosting the annual U.N. climate summit, which opened on Dec. 2 with a call from U.N. chief Antonio Guterres not to be the "generation ... that fiddled while the planet burned".

By the meeting's close on Dec. 13, negotiators hope to resolve remaining disagreements on how to implement an accord struck in Paris in 2015 to avert catastrophic global warming.