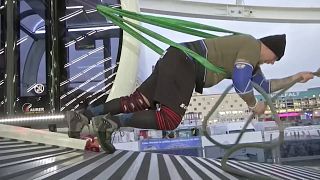 Tied to ropes attached to the ferris wheel which he pulled with his full weight, Franz Muellner from Salzburg managed to get the wheel moving under conditions he described as "brutal."

Muellner calls himself the "Austrian rock" and holds other record titles such as for "frying pan rolling," the destruction of beer cans with his stomach and pulling 50 children up a ski slope, according to his internet site.

Asked what the secret to his success was, Muellner told reporters the most important thing was to "get it moving right away."

"It has to work the first time, otherwise you stand no chance," said Muellner, out of breath.

His world record was certified by Hamburg-based "Record Institute for Germany."

Munich's "Hi-Sky" is the world's largest mobile ferris wheel and its 27 air-conditioned glass gondolas reach a height of almost 80 metres (262 ft.), according to its owners.

While Muellner said that the ferris wheel's weight was 750 tons, his newly obtained certificate puts the weight at double that, 1,500 tons.

While the exact weight remained unclear, the ferris wheel appeared to be heavy.