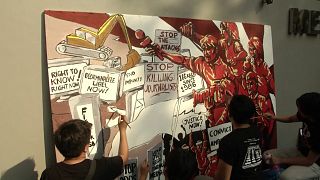 Massacre of journalists in Philippines marked 10 years on

It is considered one of the bloodiest attacks on the media in the world: a massacre that saw 58 people killed, including 32 journalists.

It happened in the Philippines on November 23, 2009; on Saturday, activists and media workers marked the 10-year anniversary.

The journalists were travelling with a local politician when they were ambushed and killed by armed men in the province of Maguindanao.

The media workers were later found in a mass grave.

The case against the suspected masterminds of the massacre, the patriarchs of Maguindanao's local political clan Ampatuan, has dragged on for 10 years.

Lawyers for the families of the 58 massacre victims said a verdict is expected to be given before the end of 2019.