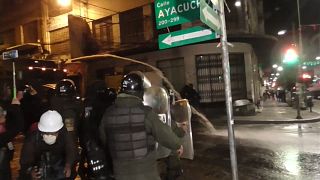 Violent clashes between security forces and demonstrators broke out in the early hours of Wednesday morning in Bolivia's capital.

Opponents challenge an official count that showed incumbent Evo Morales winning with 47% of the vote and a margin of just over 10 percentage points over his nearest competitor — enough to avoid the need for a runoff against a united opposition.

Riot police guarding access to an area surrounding the presidential palace clashed with Morales opponents as they tried to march on the building.

Morales, Bolivia's first indigenous president, has accused the opposition of trying to stage a coup d'etat.

The Organization of American States sent a team to Bolivia and began a "binding" audit of the election.