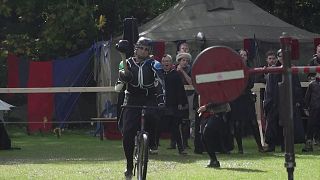 Knights participate in jousting contest on bikes in Berlin

Medieval enthusiasts donned knight costumes to show off their jousting skills in a contest held in Berlin over the weekend.

But instead of mounting a trusty steed, the participants boarded bicycles to charge at their opponents with lances.

Beer-guzzling spectators cheered as a triumphant knight hit his target, sending his adversary tumbling to the ground.

For the first time in the history of the so-called Berlin pedal battle, now in its eighth year, women took to the "battlefield".