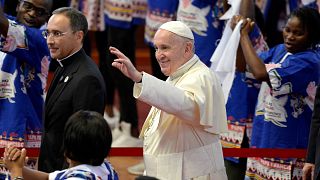 Pope Francis arrived in the Mozambique capital of Maputo on Thursday on the first leg of his three-nation visit.

Thousands of dancing, clapping and ululating Mozambicans lined the streets to welcome the pontiff as he began a six-day trip to Sub-Saharan Africa.

Pope Francis was escorted through central Maputo by an official motorcade as the welcoming faithful cheered.

During the course of the morning, the pontiff met with Mozambique’s President Felipe Nyusi. He also participated in an interreligious meeting with about 4,000 young people from Mozambique in the morning.