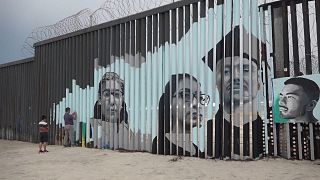 Border wall mural tells stories of Mexicans deported from US

A mural on the Mexican border in Tijuana tells the stories of people who have been deported from the US.

Visitors can scan barcodes on the artwork with their mobile phones and are then taken to a website that offers first-person narratives by some of the people featured.

They include the story of a deported US veteran and two mothers who were also deported after their children were born in the US.

There's also the tale of a man who would have been eligible for a programme to shield people who came to the US when they were very young but was deported less than a year before it took effect in 2012.

Lizbeth De La Cruz Santana conceived the mural as part of a doctoral dissertation at the University of California in Davis.

Her father entered the US illegally before she was born via the same Mexican beach where the mural has been painted.

"Technology is one of the best ways and venues for people to tell their stories," said the 28-year-old, whose parents obtained legal status through former President Ronald Reagan's amnesty law.

With a $7,500 (€6,630) grant, De La Cruz directed about 15 people who painted on polyester canvass at a Tijuana art gallery called "House of the Tunnel", which was once used to smuggle drugs in a secret underground passage to San Diego.

She partnered with Mauro Carrera, a longtime friend and muralist who lives in Fresno, California, under whose direction the deportees painted at least 80% of their own faces.

The project is also deeply personal for 32-year-old Carrera, who was born in Mexico, crossed the border illegally as a toddler, and obtained legal status through his father, who had amnesty.

The muralist said the project aimed to show that people like him, and the deportees, belong in both countries.