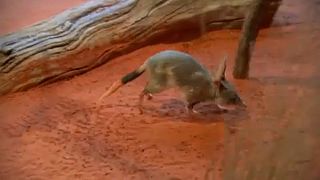 According to the Australian Wildlife Conservancy, the last report of bilbies in the wild in New South Wales dates back to 1912 - making them effectively extinct in this area.

The threat is largely from feral cats and foxes that once ruled the barren land in the Pilliga National Park area on the border of Queensland and New South Wales.

Now after years of trapping and removal of rabbits, foxes and cats, some of the native animals are roaming freely again. A giant fence also straddles the landscape hoping to aid a comeback of the bilby.

The bilbies living at this zoo in Sydney will hopefully be released into the wild.

More bilbies will be released into the predator-proof enclosure over the coming months along with other animals.

The wild deserts project and push to conserve the bilby is part of the New South Wales government's 42 million Australian dollars 'Save Our Species' initiative.

The Australian Wildlife Conservancy anticipates that a population of around 850 bilbies will form in the Pilliga National Park area over the next few years.