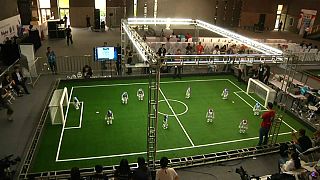 Falling and scoring, robots from all across the world kicked off the RoboCup Asia-Pacific Tianjin Invitational Tournament in China.

As a side event of the third World Intelligence Congress, the matches featured 400 contestants from 10 different countries, competing against each other with their best droids in Tianjin.

The city is one of China's most important northern ports and received 100 billion yuan (€12.94 billion) worth of support for the local artificial intelligence industry.

Among the competitors were teams from countries including China, Japan and Italy who brought their self-made, assembled and programmed robots.