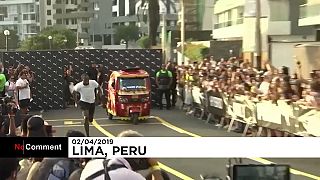 Bolt races against a motorcycle taxi and wins

Eight-time Olympic gold medalist Usain Bolt competed against a motorcycle taxi in the Peruvian capital Lima on Tuesday... and won.

The retired Jamaican athlete then greeted the hundreds of cheering fans who came to the event, before making his signature gesture.

Bolt, 32, retired after the 2017 World Athletics Championships in London.