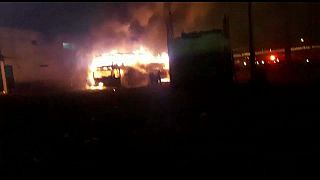 Fire erupts on bus in Peru, at least 20 dead

Authorities said at least 20 people were killed when a fire broke out on a bus on the outskirts of Peru's capital Lima on Sunday.

Mario Casareto, Lima fire department chief, said firefighters had not yet determined the exact number of deaths as people had been trapped on the second deck of the bus as they tried to escape.

A fire department spokesman said the blaze took place while the bus was at a stop where poor people catch buses, often at lower fares than the normal, more-regulated bus stops.