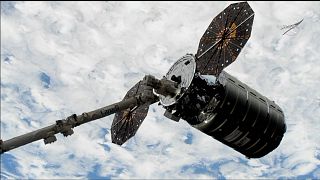 An unmanned Northrop Grumman cargo spacecraft arrived at the International Space Station (ISS) early on Monday, in a mission to deliver supplies and scientific equipment.

The cargo spacecraft, called Cygnus, was launched aboard the company's Antares rocket from NASA's Wallops Flight Facility in Virginia on Saturday.

The Cygnus is delivering some 3,350 kilograms of supplies and scientific equipment to the ISS crew.