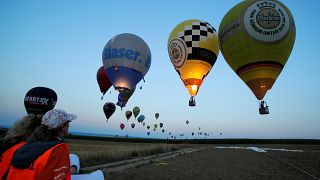 The competition was officially launched on August 18 and will end with an awards ceremony on August 25.

Around 150 teams from 38 countries are taking part, with spectators and competitors alike hoping for calm weather throughout the tournament.

There are several tasks pilots must complete in order to claim victory at the event, including landing as close to a specified landing spot as possible.

Landing and takeoffs of the balloons require skill and leave spectators engrossed.

This is the first time the competition has been held in Austria, with the contest taking place near Gross-Siegharts.