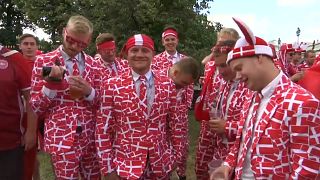 Baguettes and beer: French and Danes gear up for Moscow match

French fans waved baguettes, while their Danish counterparts drank beer as they gathered across the Kremlin on Tuesday ahead of a match that determined who will top Group C.

France has been criticised for lacking juice in its first two games — against Peru and Australia — despite winning them. But fans balked at the criticism, saying the team will get better as they progress.

Denmark fans, who formed a sea of red in Manezh square from early in the morning, were hoping star midfielder Christian Eriksen will usher the team to a victory over France.

France and Denmark drew 0-0 on Tuesday. Both teams advance to the next stage.