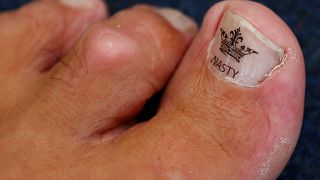 Every year, the charming, quiet English village of Fenny Bentley welcomes athletes from around the globe. Their sport of choice? Toe wrestling.

Reigning supreme over the sport is Alan ‘Nasty’ Nash. The Briton was, for the 15th year running, crowned world champion on Friday.

Cloaked in a Union Jack flag emblazoned “The King of Kings”, Nash defeated Ben Woodroffe in a toe-curling finale.

“Technique tonight was, I let the guy use his own body weight against him, go defence mode at first and when he wasn’t expecting it, went for the kill,” Nash said after his victory.

The sport in which two opponents lock feet and attempt to pin each other's foot down was established in 1970.

Competitors’ feet are inspected before every match for signs of fungus or injury.

The inaugural Dubai Sail Grand Prix has taken place marking the first Asia-Pacific leg of the Sail GP championship. Dubbed world’s most exciting racing on water the event was presented by P&O Marinas and took place at Dubai Mina Rashid.

Emergency EU Council convened over refugee concerns in the Mediterranean

No rest for Kherson as Russia steps up its attacks