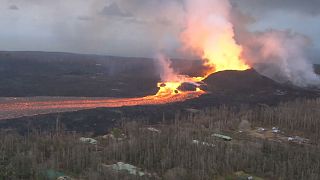 Watch: Taking a dip in the Antarctic and Hawaii spews lava — No Commen

Earlier this week, Hawaii's Kilauea volcano continued to wreak havoc on the island. Glowing lava spewed from the volcano on Sunday spreading across Hawaii's Big Island. The volcano launched into a massive eruption six weeks ago, sending ash plumes into the air. Up to 600 homes have been destroyed and experts say there is no end in sight as to when the volcano will calm down.

Meanwhile, in Japan, a magnitude 6.1 earthquake shook the Osaka area on Monday morning rush hour, closing down factories. Three people were killed in the earthquake. Japan is one of the world's most seismically active areas.

Protests rocked Spain, as relatives of the victims of gang violence in South America called on the Spanish government to protect them. A refugee association says out of the 2,000 people who are seeking protection in Spain, only 25 received it in the last four years.

In Brazil, over 2,000 illegal firearms were destroyed by the army. A tank ran over firearms ranging from handguns to automatic rifles, which were seized during police operations or criminal investigations.

And Australian expeditioners took the plunge in icy waters in the Antarctic. They braved the -2 degree waters to celebrate midwinter.