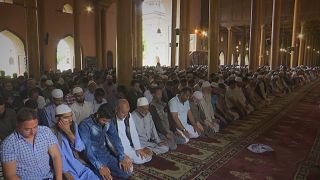 Devout Muslims abstain from all eating, drinking and smoking from dawn to dusk for each day of the lunar month, which lasts for around 30 days.

On Wednesday, the Indian government announced that its troops would halt counter-insurgency operations in disputed Kashmir during Ramadan, its first such declaration in 18 years.

Watch: 'Where is my mum?' child pulled from Turkey rubble asks