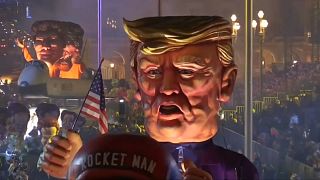 Thousands of people took to the streets in the French Riviera town of Nice to welcome the 134th edition of the King's Carnival.

Astronaut Thomas Pesquet was honoured at Saturday nigth's event, which featured space as its main theme.

Giant papier-mâché figures of North Korean leader Kim Jong Un and US President Donald Trump were featured on one of 17 floats that rolled through the streets.

The carnival is based on a tradition dating back to 1294.