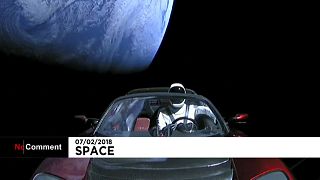 "Starman" sets out on space trip after big rocket launch

A space-suited mannequin in a convertible is headed for an endless road trip past Mars, after being launched onboard SpaceX's big new rocket.

The Falcon Heavy blasted off on Tuesday on its first test flight, carrying the red electric sports car.

With liftoff, the Heavy became the most powerful operational rocket, doubling the liftoff punch of its closest competitor.

Ballast for a rocket debut is usually concrete or steel slabs, or experiments.

But SpaceX CEO Elon Musk is also the head of electric carmaker Tesla. And he combined his passions to add a dramatic flair to the Heavy's long-awaited inaugural flight - by sending up his own Tesla Roadster.

The car is driven by a mannequin named "Starman", after the David Bowie song.