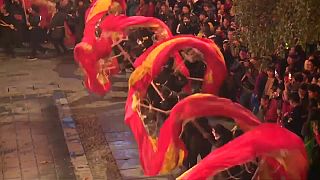 The fire dragon, made up of a bamboo structure with burning incense sticks stuck all over it, creates two full circles as the dancers go round and round.

Over 100 locals took part in different activities, such as fire dragon dance, fire spell, sea of fire and skills of fire.

"I am from Sichuan Province. I am very happy to be here in Xibu street. It's very lively, with all the folk customs, festival and all the programs," said a female tourist from southwest China's Sichuan Province.

The activity this time is to further promote the tourism culture and push forward the winter tourism development of the city.