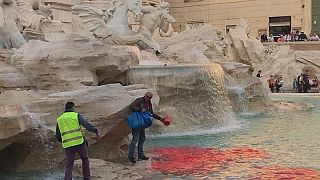 Updated: 27/10/2017
<p>The waters of Rome’s Trevi Fountain, one of Italy’s top tourist attractions, turned red on Thursday (October 26) after a man dumped dye into the main pool, a city official said.</p> <p>Italian activist Graziano Cecchini pulled the same stunt 10 years ago. He insisted that the dye wouldn’t harm the fountain and was intended as a protest against Rome’s ‘corruption and filth.’</p> <p>According to witnesses, Cecchini managed to climb onto the side of the fountain and pour the dye in, turning the Trevi pool into a murky red lake. Police escorted him from the scene.</p> <p>In a statement, Cecchini said the protest was a “cry that Rome isn’t dead, that it’s alive and ready to return to be the capital of art, life and Renaissance.”</p> <p>Cecchini was also responsible for sending thousands of colored plastic balls down Rome’s Spanish Steps in 2008.</p> <p>By Thursday afternoon, authorities had turned off the Trevi’s hydraulics and were draining the fountain pool to prevent any damage from the dye.</p> <p>The fountain, where tossing a coin into the pool is supposed by superstition to guarantee one’s return to the eternal city, is a big tourist attraction in Rome. </p> <p>Actress Anita Ekberg famously frolicked in the fountain’s pool in the 1960 film “La Dolce Vita”.</p>
no comment