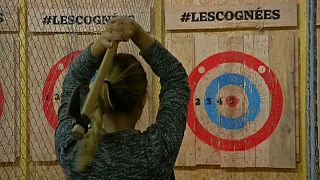 Parisians are famous for their love of art, fashion, good food and fine wine, so obviously they’ll jump at the chance to pay 19 euros an hour to throw an axe at a target on a wall. As if the French didn’t already have enough axes to grind…

Parisians are famous for their love of art, fashion, good food and fine wine, so obviously they’ll jump at the chance to pay 19 euros an hour to throw an axe at a target on a wall. As if the French didn’t already have enough axes to grind…

At least Thomas Morel is hoping they will. He’s a 30-year-old former financier who saw how much Canadians liked the sport, or game, or pastime, or whatever axe-throwing might be. “It hits a wooden target, there are circles which each represent a certain number of points. We created various rules so that there can be a bit of a competition,” he says.

“Axe throwing is a great sport, it requires concentration and feeling relaxed, and it’s quite addictive. I thought it was a great idea and I wanted to offer it to people in Paris,” he explains. So he opened Les Cognees – French for “axes” or “hatchets” – where people can gather after work and pay to hurl heavy edged weapons around. What could go wrong?

“There aren’t any safety concerns, but throwing axes is not quite the same as knitting! It’s a great release,” said one woman.

Quite a lot, obviously, but safeguards are in place: no alcohol is served, the blades of the axes are blunted and security measures are read out to participants when they arrive. And they are arriving. Morel’s venue is in the city’s north-east 18th district, a traditionally working-class neighbourhood showing tentative signs of gentrification. On a typical day this week, it had attracted about 30 men and women in their mid-20s to mid-30s.

“It’s quite primeval… throwing axes, it’s not something you’re used to doing all the time. And it’s true that aiming for a giant wooden target takes us back to nature, it’s really nice,” said an enthusiastic 29-year-old lawyer.

Morel’s timing is good. France is trying to get more people to take part in sports, partly to promote the 2024 Olympic Games in Paris.