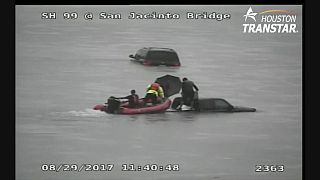 Updated: 30/08/2017
<p>Authorities in Houston say emergency personnel have conducted more than 3,500 rescues since Harvey’s floodwaters began overtaking the city.</p> <p>Video from the deluged city shows a dramatic rescue by U.S. Customs and Border Protection of a person caught in fast moving water.</p> <p>A second video by Houston TranStar, a regional transportation agency shows two individuals standing atop a mostly submerged vehicle, and then being rescued by personnel is a small inflatable watercraft.</p> <p>The city’s fire chief has said his agency has responded to more than 1,000 calls for service – including 400 water rescues – since Harvey inundated much of the city.</p> <p>A Pentagon official says the military’s contribution to Harvey rescue and recovery efforts could soon increase by tenfold or more.</p>
no comment