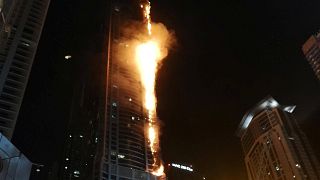 Updated: 04/08/2017
<p>A fire ripped through one of the world’s tallest residential towers in Dubai on Friday, forcing hundreds of occupants to flee the 337 metre-tall, 79-storey structure.</p> <p>It’s the second blaze to sweep through the high-rise – which happens to be called the Torch tower – in just two years.</p> <p>The building was evacuated, no injuries were reported, and there was no immediate word on the cause of the blaze.</p> <p>The incident may revive questions about the safety of materials used on the exteriors of tall buildings across the world.</p> <p>An investigation by the management of the Torch after its 2015 fire found that most of the damage was to the cladding, exterior panelling used for decoration or insulation.</p>
no comment