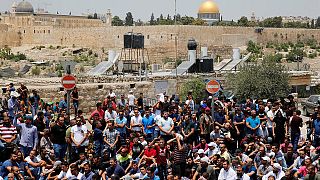 Security has been tightened around Jerusalem’s Old City following angry protests about the installation of metal detectors at a holy compound.

The equipment was installed last weekend leading to violent clashes outside the site, known to Muslims as Haram al-Sharif and Jews as the Temple Mount. Protesters said it was a violation of the status quo.

Israel banned all men under 50 years-old from the vicinity after Palestinians asked worshippers to go there for Friday prayers.