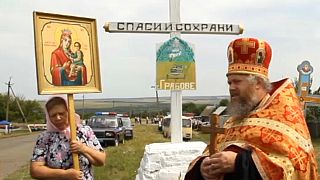 A small Orthodox Christian ceremony was held at the site of the Malaysia Airlines flight MH17 plane crash near the village of Hrabove in Ukraine’s Donetsk region on Monday, the third anniversary of the disaster.

The rebel-held east Ukrainian village where MH17 was shot down honoured the 298 victims at a simple ceremony.

Some of those present held up banners blaming Ukraine for the disaster.

An international inquiry in 2016 found that the missiles which destroyed the plane came from Russia and were fired by rebels fighting against the authorities in Kyiv. Russia denies any involvement.

The victims came from 17 countries, and included 196 Dutch citizens.