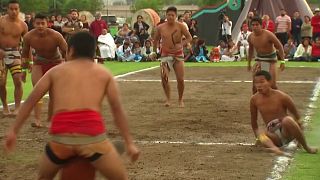 Updated: 16/04/2017
<p>To celebrate Mexican heritage, a group of Mexicans organised and participated on Saturday (April 14) in the national championship for the Mesoamerican Ballgame in the middle of the grounds surrounding Teotihuacán, the pre-Hispanic city outside of Mexico City.</p> <p>The pre-Colombian Mesoamerican Ballgame dates back to around 1500 BC. </p> <p>Gameplay varies among different versions of the game, and debate lingers over how the original participants actually played the game several thousands of years ago. </p> <p>Versions played at the two-championship centre on trying to keep a rubber ball in play through knocking it from the hips towards the other team. </p> <p>Failure to keep the ball in play results in the opposing team garnering a point.</p>
no comment