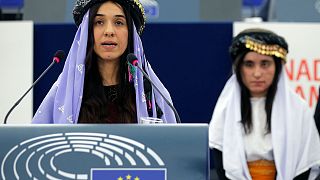 Updated: 14/12/2016
<p>The Sakharov Prize for Freedom of Thought, awarded each year by the European Parliament, has been given to two Iraqi Yazidi women who were held as sex slaves by <span class="caps">ISIL</span> and now campaign for human rights.</p> <p>European Parliament President Martin Schulz gave the prize, honouring individuals and organisations who defend human rights and fundamental freedoms, to Nadia Murad and Lamiya Aji Bashar.</p> <p>After escaping sexual enslavement, they both became spokespeople for women affected by the Islamist group’s campaign of sexual violence and for the persecuted Yazidi minority.</p>
no comment