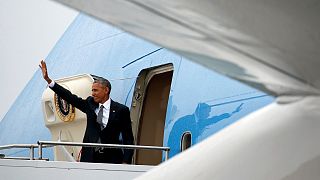 Updated: 19/11/2016
<p>After meeting with Angela Merkel and other European leaders in Berlin, Barack Obama ended his last visit to Europe as US President. </p> <p>The leaders of Germany, Britain, France, Italy and Spain met at a mini-summit in Berlin to say goodbye to the outgoing president. Top of the agenda in their discussions were post-Brexit challenges, weak economic growth, the rise of the far-right and Donald Trump’s US election victory.</p> <p>It fell to German Chancellor Angela Merkel to bid a European farewell to the 44th President of the United States.</p> <p>During his last official visit to Europe, Barack Obama also had the chance for the first time in his eight-year term to fly to Athens, where during a 30-hour trip he met Greek President Prokopis Pavlopoulos and Prime Minister Alexis Tsipras.</p>
no comment