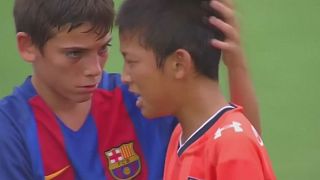 Updated: 31/08/2016
<p>A youth football team from Barcelona comforted their Japanese opponents after winning the U-12 Junior Soccer World Challenge 2016 in Tokyo on Wednesday (August 31), drawing attention from many on the Internet.</p> <p>When the referee blew the whistle to signal the end of the match, the Japanese children dropped to the ground, crying, while their opponent celebrated. However, shortly afterwards they began consoling their Japanese rivals.</p> <p>On YouTube, the video has garnered almost a quarter of a million views, with about 150 comments.</p> <a class="embedly-card" href="https://www.facebook.com/euronews/videos/10154158268718110/">euronews – Timeline | Facebook</a> <script async src="//cdn.embedly.com/widgets/platform.js" charset="UTF-8"></script>
no comment