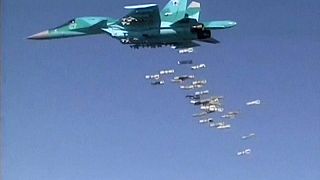 Updated: 19/08/2016
<p>The Russian Defence Ministry released a video showing jets taking off from an airbase in Iran.</p> <p>Russian fighter jets have recently launched a new wave of airstrikes on Islamic State group fighters in Syria.</p> <p>Iran on Tuesday allowed Russian warplanes to take off from its territory to bomb targets in Syria, for the first time since Russia launched it’s operation in 2015.</p>
no comment