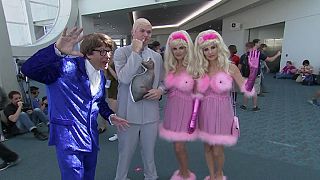 Updated: 24/07/2016
<p>Fans came dressed as their favourite characters from comics and film at Comic-Con International in San Diego. The convention included lookalikes from Austin Powers, Star Wars, the Fifth Element and many comic book superheroes. It was also attended by stars from the hit TV series, Game of Thrones, who signed autographs.</p>
no comment