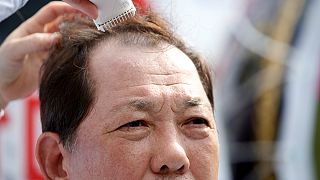 Shaving heads, another way to protest in South Korea

Thousands of residents of South Korea’s southern county of Seongju held a rally on Thursday (July, 21) in Seoul to protest against the government’s decision to choose their town as a site where a U.S. Terminal High Altitude Area Defence (THAAD) anti-missile defence unit will be deployed.

During the rally, the governor of Seongju shaved his head to protest the decision, and residents chanted while holding up South Korean national flags and anti-THAAD banners.