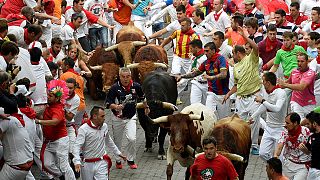 Updated: 10/07/2016
<p>Four runners were gored in the fourth bull-run of Pamplona’s San Fermin festival in northern Spain. Among the many towns holding festivals featuring bull-running this summer, San Fermin in Pamplona is the most famous internationally and attracts thousands of revellers from around the world. There are four more bull-runs still to come at the festival.</p>
no comment