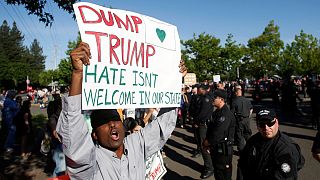 Updated: 08/05/2016
<p>Security was tight at a Eugene convention centre as a few thousand people arrived for a rally by Republican presidential presumptive nominee Donald Trump, and a couple of hundred protesters gathered outside.</p> <p>Protesters were kept about 300 metres away by a fence and by police. Some of them shouted at Trump supporters as they arrived.</p>
no comment