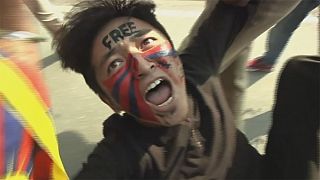 Updated: 10/03/2016
<p>Protesters shouting anti-China slogans were detained during a demonstration in New Delhi on Thursday.</p> <p>The protest was held to mark the 57th anniversary of the Tibetan uprising against Chinese rule.</p> <p>China sent troops into the Tibet region in 1950. After a failed uprising in 1959 Tibet’s spiritual leader fled into exile.</p>
no comment