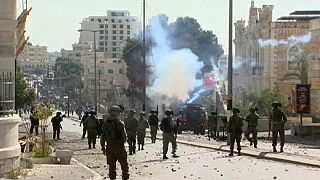 Updated: 15/10/2015
<p>An Israeli armed vehicle burst into flames and at least one Palestinian was injured during clashes in the West Bank city of Bethlehem on Wednesday.</p> <p>Palestinians threw rocks at Israeli forces who responded by firing tear gas canisters.</p> <p>The unrest comes after a 27-year-old Palestinian man was shot dead in a protest in Bethlehem on Tuesday.</p>
no comment