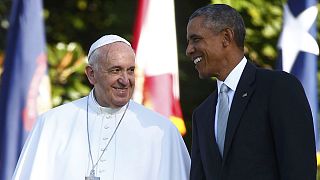 Updated: 24/09/2015
<p>Pope Francis and President Barack Obama held private talks at the White House on Wednesday (September 23) before the Pontiff paraded through the streets of Washington on the first full day of his visit to the United States. Pope Francis and Obama saw eye-to-eye on some issues like climate change and defense of the poor but are at odds over abortion and gay marriage.</p>
no comment